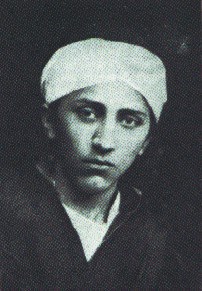 Mírzá Mihdí was the youngest of three surviving children of Bahá’u’lláh and His wife Ásíyih Khánum, who is generally known by the title Navváb (Highness). Mírzá Mihdí was born in 1848 in the family’s rented house near the Shemiran Gate (Darvázih Shimrán) in northern Tehran. He was named after Mihdí, Bahá’u’lláh’s elder full brother, who was dear to Him and who had recently died. In later years Bahá’u’lláh gave Mírzá Mihdí the title "the Purest Branch."

Mírzá Mihdí was four years old when Bahá’u’lláh was imprisoned with a number of other Bábís in the Siyáh-Chál (Black Pit) dungeon in Tehran in August 1852 and the family’s possessions were plundered and seized. Four months later, Bahá’u’lláh was released and then banished for life from Iran. He chose to go to Baghdad, the capital of the Ottoman province of Iraq. On 12 January 1853 He and His family left Tehran on the first stage of their exile. Mírzá Mihdí, who was unwell at the time and unfit to undertake three months of hard travel across the Iranian Plateau and the Zagros Mountains in severe winter weather, had to be left behind in the care of relatives. He was not reunited with his parents until 1860, after Bahá’u’lláh’s return from the mountains of Sulaymaniyah, where He lived in seclusion for two years. Mírzá Mihdí, then twelve, joined his parents in Baghdad, and the family remained there for another three years, until April 1863.

Mírzá Mihdí accompanied Bahá’u’lláh in His successive exiles to Istanbul, Edirne, and, finally, to the penal colony of Acre in Ottoman Palestine. The band of exiles—numbering close to seventy—arrived in Acre on 31 August 1868. They were confined to the prison barracks under harsh conditions, enduring the rigors of malnutrition, disease, and lack of potable water. They also suffered extreme isolation; the strict terms of their imprisonment limited contact among themselves and with the local population. For the first time since Bahá’u’lláh’s banishment from Iran in 1853, He was totally inaccessible to those who sought His presence. Followers who made the arduous journey from Iran often had to return without having seen Him. Some, standing beyond the moat that encircles the city and looking at the barracks from a great distance, were able to catch "a fleeting glimpse" of His face in the window of His cell. If they managed to enter the prison city, they were able at best to catch sight of Him among the crowds at the public bath, where the prisoners were taken weekly to bathe.

Mírzá Mihdí and ‘Abdu’l-Bahá were brothers. Despite his youth, Mírzá Mihdí was accustomed to hardship and was recognized as "a pillar of strength" among the exiles during the difficult period after their departure from Baghdad. He resembled ‘Abdu’l-Bahá in appearance and character and was noted for his piety, gentleness, dignity, courtesy, and patience. Throughout his brief adult life, Mírzá Mihdí was Bahá’u’lláh’s companion and served as one of His secretaries, recording the sacred texts (tablets) that He revealed. Many such manuscripts in Mírzá Mihdí’s excellent handwriting are extant.

One summer evening in 1870, while pacing on the prison rooftop, as was his custom, Mírzá Mihdí was so deep in prayer and meditation that he failed to note a familiar hazard. He plunged through an open skylight to the floor below, falling on a wooden crate that pierced his chest and caused severe bleeding. An Italian physician was called to the prison, but Mírzá Mihdí died the next day, 23 June. During the hours when he lay dying, he expressed to Bahá’u’lláh a final wish: that his death might be accepted as a sacrifice so that the restrictions of confinement might be eased, allowing the followers of Bahá’u’lláh who sought to visit Him the opportunity to attain His presence.

While ‘Abdu’l-Bahá, grief-stricken, kept watch outside a tent pitched in the prison courtyard, Mírzá Mihdí’s body was washed, shrouded, and prepared for interment by Shaykh Mahmúd ‘Arrábí, a prominent resident of Acre who had become a follower of Bahá’u’lláh. Lacking the means to buy a coffin, Bahá’u’lláh obtained the money by having a rug from His own room sold. Mírzá Mihdí’s coffin, escorted by fortress guards, was carried beyond the city walls and buried in an Arab cemetery adjacent to the shrine of Nabí Sálih, traditionally considered the burial place of a prophet mentioned in the Qur’an.

Around the time of Mírzá Mihdí’s burial, an earthquake shook the region—strong enough to be felt thirty-five kilometers (21.8 miles) away in Nazareth, where it was noted by the Bahá’í historian Nabíl, who was staying there at the time. Bahá’u’lláh refers to the earthquake in a passage addressed to His dead son, stating, "When thou wast laid to rest in the earth, the earth itself trembled in its longing to meet thee."

Four months after Mírzá Mihdí’s death, his dying wish—that the way be cleared for those seeking to visit his father—was realized. The exiles were released from the barracks and allowed to take up residence in the town of Acre, where it was possible for them to receive visitors.

The loss of Mírzá Mihdí was a source of intense anguish for Bahá’u’lláh and His family. One of their companions recalled hearing Bahá’u’lláh lament "Mihdí! O Mihdí!" as His son’s life ebbed away. On the day of Mírzá Mihdí’s death, Bahá’u’lláh wrote: "Glorified art Thou, O Lord, my God! . . . Thou seest me in the hands of Mine enemies, and My son blood-stained before Thy face, O Thou in Whose hands is the kingdom of all names. I have, O my Lord, offered up that which Thou hast given Me, that Thy servants may be quickened and all that dwell on earth be united." Bahá’u’lláh is reported to have comforted a grieving and disconsolate Navváb by repeating the assurance that God had accepted their son as His ransom.

Shoghi Effendi states that Bahá’u’lláh exalted the death of Mírzá Mihdí "to the rank of those great acts of atonement associated with Abraham’s intended sacrifice of His son, with the crucifixion of Jesus Christ and the martyrdom of the Imám Husayn."

Bahá’u’lláh referred to Mírzá Mihdí on the day of his death as "he that was created by the light of Bahá" and described his dying "at a time when he lay imprisoned at the hands of his enemies" as a "martyrdom." In the same tablet, Bahá’u’lláh extols Mírzá Mihdí’s station: "Happy art thou in that thou hast been faithful to the Covenant of God and His Testament, until Thou didst sacrifice thyself before the face of thy Lord, the Almighty, the Unconstrained. Thou, in truth, hast been wronged, and to this testifieth the Beauty of Him, the Self-Subsisting. Thou didst, in the first days of thy life, bear that which hath caused all things to groan, and made every pillar to tremble. Happy is the one that remembereth thee, and draweth nigh, through thee, unto God, the Creator of the Morn."

In another tablet, Bahá’u’lláh states: "Blessed art thou, . . . and blessed he that turneth unto thee, and visiteth thy grave, and draweth nigh, through thee, unto God, the Lord of all that was and shall be . . . I testify that thou didst return in meekness unto thine abode. Great is thy blessedness and the blessedness of them that hold fast unto the hem of thy outspread robe . . . Thou art, verily, the trust of God and His treasure in this land. Erelong will God reveal through thee that which He hath desired."

In December 1939—despite obstacles caused by the outbreak of World War II, local instability, riots, and the opposition of adversaries—Shoghi Effendi succeeded in transferring the remains of Mírzá Mihdí and Navváb from two different Muslim cemeteries in Acre to Mount Carmel in Haifa. On 24 December 1939 the coffins lay in state in the Shrine of the Báb. The following day, they were buried in the monument gardens near the Shrine of the Báb, alongside the resting place of Bahíyyih Khánum, Mírzá Mihdí’s sister, who died in Haifa in 1932.

Shoghi Effendi himself was among the bearers who carried the coffins of his great-grandmother and granduncle from the Shrine of the Báb to their final resting places, easing each into place in turn and scattering flowers upon them. After the tombs were sealed, Shoghi Effendi recited prayers that Bahá’u’lláh had revealed to be read at their grave sites.

Of the significance of the reinterments Shoghi Effendi writes:

The conjunction of these three resting-places, under the shadow of the Báb’s own Tomb, embosomed in the heart of Carmel, facing the snow-white city across the bay of ‘Akká [Acre], the Qiblih of the Bahá’í world, set in a garden of exquisite beauty, reinforces, if we would correctly estimate its significance, the spiritual potencies of a spot, designated by Bahá’u’lláh Himself the seat of God’s throne. It marks, too, a further milestone in the road leading eventually to the establishment of that permanent world Administrative Center of the future Bahá’í Commonwealth, destined never to be separated from, and to function in the proximity of, the Spiritual Center of that Faith, in a land already revered and held sacred alike by the adherents of three of the world’s outstanding religious systems.

Further, Shoghi Effendi identifies the precincts of these three resting places as the "focal center" of the administrative institutions at the Bahá’í World Center: "the conjunction of the resting-place of the Greatest Holy Leaf with those of her brother and mother incalculably reinforces the spiritual potencies of that consecrated Spot which . . . is destined to evolve into the focal center of those world-shaking, world-embracing, world-directing administrative institutions, ordained by Bahá’u’lláh and anticipated by ‘Abdu’l-Bahá. . . ."

© 2009 National Spiritual Assembly of the Bahá’ís of the United States.